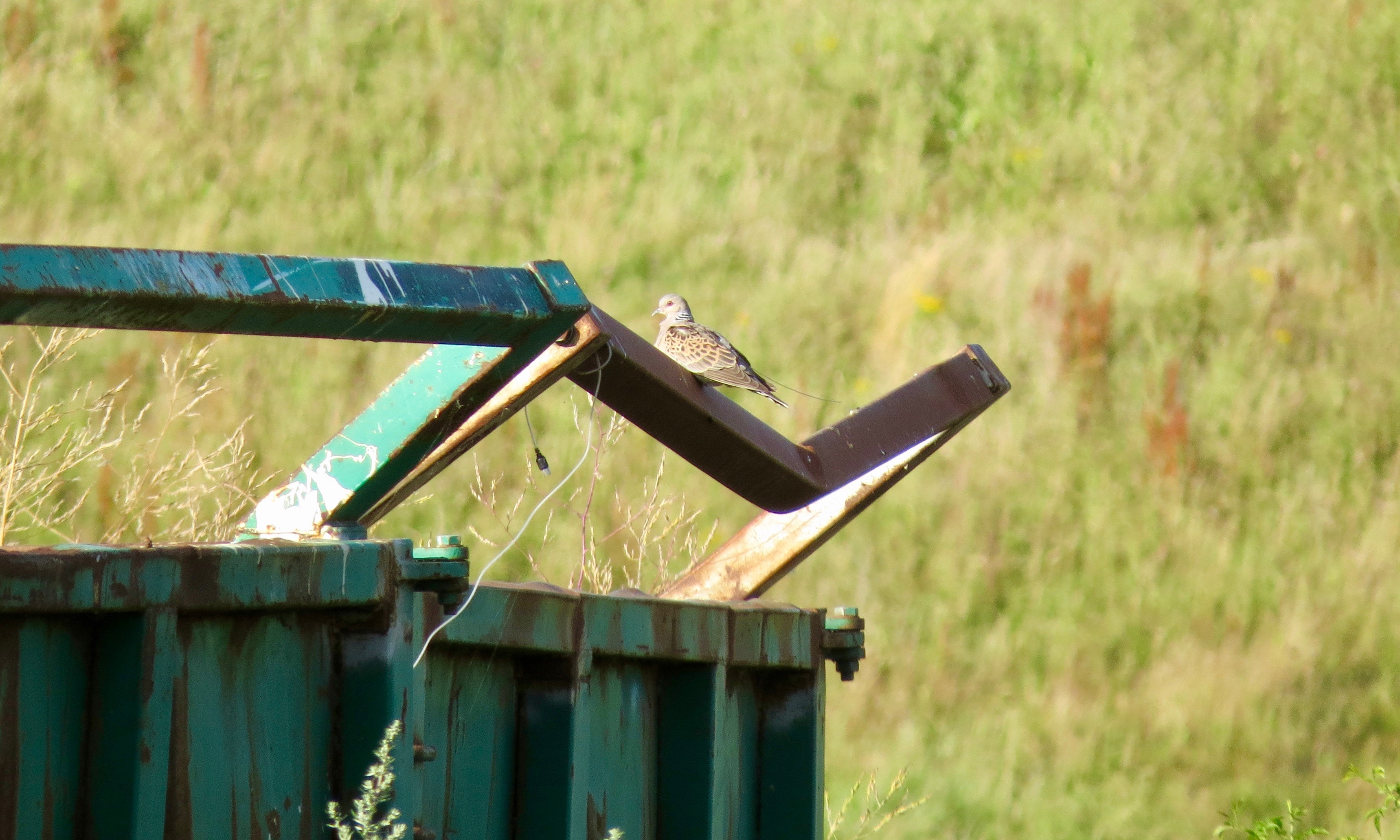 On the 14th July I spent a day in the field with RSPB scientists tracking a satellite tagged Turtle Dove 161002, also known as Angela. Angela was one of ten Turtle Doves satellite tagged in 2016, but the only one still transmitting by the summer of 2017. Bird 161005, named Lawford, after its favoured village in Essex, also made the return migration to and from the wintering ground but ceased to transmit beyond the beginning of June 2017.

Before unpacking my experience of satellite tagged birds, it is worth making a brief introduction for those that have not encountered Dove Step before. I am an unashamed Turtle Dove enthusiast and have fundraised for Operation Turtle Dove since 2012. Over the years, through fundraising events with the support of friends, Dove Step has raised over £15 000 in support of Operation Turtle Dove. Most recently in March of this year, again with support from friends, I completed a complete on-foot crossing of Spain walking the 704.5 miles from south to north in just 28 consecutive days – Dove Step’s biggest challenge to date and a gruelling migration in its own right. Having previously endured the east coast of England, the Channel and the whole of France, I now have a fascination and hard-earned respect for the migratory route of our Turtle Doves.

I am fortunate to have previously seen a satellite tagged Turtle Dove in the field, namely; Titan.

Titan was one of the birds tagged in the first tagging rounds back in 2014 and established the baseline for understanding the routes and behaviour of English breeding Turtle Doves on migration. I saw Titan on his Suffolk coastal territory in the summer of 2015. This encounter was a large stimulus for continuing with our Dove Step journey and the mimicry of the Turtle Dove migration through Spain. Having following Titan’s progress avidly, it was a really affirming moment to see the bird that had so enriched the collective understanding of our Turtle Doves and their use of the western Afro-European flyway. Titan left the UK on the same day, in both 2014 and 2015 – 19th September; he was site faithful on both the breeding and wintering grounds, returning to favoured areas. He was also reactive and flexible, stopping over on migration in different locations dependent upon conditions each year and even, as was the case in 2015, aborting the northward migration upon meeting a sandstorm in the Sahara. Although the storm meant he was late back to the breeding grounds the adaptability undoubtedly prevented him succumbing to the elements in the Sahara.

Each satellite tag has an expected lifespan of around two years, accordingly, Titan’s tag stopped transmitting almost right on cue at the end of April 2016. It could be that this marked the end of Titan, however, I much prefer to think of it as the end of the tag and not of the legend.

With the baseline secured from Titan offering the first definitive and multi-migration information on our Turtle Doves, there was an obvious desire to validate this via further datasets and more satellite tagging. To this end, more birds were fitted with tags during the summer of 2016.

In following Titan’s progress across 2014 – 2016, it was gratifying to see his route criss-cross the route through France that I took with friends. This same western flyway has since been confirmed by Angela and Lawford.

On the first Dove Step, the team walked from Lakenheath to Saltholme RSPB reserves via Frampton Marsh RSPB. Angela favoured the Frampton area during 2016. Given the Dove Step 1 history with the reserve, it was exciting to re-visit it on the trail of a satellite tagged bird this summer. Although off reserve during my visit, from satellite returns we know Angela had certainly spent time at Frampton during spring and summer of 2017, before settling on favoured habitat to the north. Through satellite returns and on-the-ground triangulation we were able to pinpoint Angela’s location. Despite a full day’s effort in the field, from 07:30 to 18:30, we had drawn a blank and encountered no Turtle Doves. The returns narrowed down the potential area to a site as little as 200m square. Despite the satellite tag guidance and identifying likely habitat we did not manage to see a single Turtle Dove. With the day waning and a return journey to Suffolk to contend with, we considered calling it a day. I motioned to fellow Turtle Dove tracker, Sam, that I would view the site from a different location. Much to my surprise this produced the first Turtle Dove of the day! Surprise, because it was perched, not on a tree or bush, but preening upon some scrap metal! Despite the less than salubrious perch the Turtle Dove was absolutely stunning in the evening light, I raised my Opticron binoculars (Opticron are Dove Step supporters) and was able to see not only the plumage detail but also the antennae of the satellite tag! We had found Angela!

Finding a tagged bird in the field is always a thrill; whilst satellite and on-the-ground returns help, leg work is always required. It might have taken all day, but in this case the timing could not have been better – Angela had returned from daytime feeding to relieve her incubating partner. The birds swapped over nest duty and we were then treated to the male, Angela’s mate, song flighting over his territory and giving the exceptional turring song from favoured perches.

To top it all, we also heard a more distant third bird singing!  Zero to three Turtle Doves within minutes! In my opinion, just reward for twelve hours in the field and we finished the day watching Angela’s mate giving an arching display flight.

Angela returned data from the Frampton area on 09th August 2016 before crossing the English Channel on 11th September, 2016; by the 12th September she was on a parallel with Nantes, France and Bayonne by 17th September 2016. Coincidentally, Bayonne is where we concluded Dove Step 2, our take on a triathlon, over 730 miles completed in just 14 days. The 20th September saw Angela hit central Spain, before teetering upon the Straights of Gibraltar between the 20th and 30th September. By the 01st October Angela was in northern Morocco before staging the crossing of the Sahara between the 02nd and 04th October. Once south of the Sahara, Angela took a week to move from Mauritania and down into Mali to settle into favoured wintering areas.

The northern return migration kicked off in late April, with the land mass of northern Africa dispatched in just a few days, before a stop over in Morocco between the 02nd May and 21st May. The entirety of Spain was covered in just two days across the 23rd and 24th May – with overnight flights of up to 400 miles in one flight! This makes my effort and the 28 days it took me to walk Spain laughable! My only excuse is that I am not blessed with wings and weigh much more than a Turtle Dove. Still, if I was to repeat the journey I would seek to narrow the time gap between Angela and myself.

France was covered in a more leisurely three week period, with Angela not arriving back into the UK until 16th June, returning to breeding grounds in Frampton, Lincolnshire by 19th June 2017. Four weeks later on 14th July I was able to see Angela, in all her glory.

I am eagerly awaiting any news of successful fledging and of course, of the autumn migration…