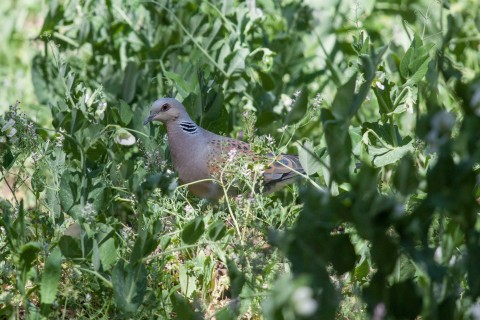 There are four main factors associated with the decline of turtle doves. These include the loss of suitable habitat in both the breeding and non-breeding range, unsustainable levels of hunting on migration and disease. The Operation Turtle Dove team are working hard to understand these threats so that we can develop – and deliver – conservation solutions.

Food shortages on their breeding grounds

Research points towards the loss of suitable habitat on the UK breeding grounds and the associated food shortages for turtle doves being the most important factor driving turtle dove declines.

Research carried out in England shows that adult turtle doves are producing half as many chicks as they were in the 1970s. Unlike other dove and pigeon species in the UK, turtle doves are obligate granivores – their diet is formed exclusively of seeds. The lack of available weed seeds in the countryside, as well as dietary switch from weed seeds to cereal grains has been associated with an alarming reduction in nesting attempts. This alone is sufficient to explain the current rates of decline.

For this reason, a large component of the project is focused on establishing feeding habitat over the species core UK breeding range in East Anglia and South-East England.

An emerging potential additive cause of population decline is the disease trichomoniasis. Recent research has highlighted a high prevalence of infection in turtle doves by the parasite that causes this disease. In response to this, an RSPB-supervised PhD project began in 2013 to investigate the possible role of trichomoniasis in the decline of turtle doves.

Unsustainable levels of hunting on migration

Of the estimated population of 3-6 million pairs of turtle dove breeding in Europe and Russia the annual hunting bag total in EU member states alone was estimated at 2-3 million birds, although it is important to note that these figures are from the EU Turtle Dove Management Plan published in 2007. If these figures are accurate estimates, hunting may constitute a significant factor driving population declines.

Habitat loss on their wintering grounds

Africa’s landscape is changing too. Increasing human population pressure is transforming many of the wooded habitats favoured by our migratory birds into more intensive agricultural landscapes, with livestock causing additional damage through overgrazing.

On the wintering grounds, turtle doves roost communally in Acacia thickets, seeking sites that are safe from predators and disturbance. As trees are being lost from the landscape, these safe roosting sites are become fewer. With birds gathering in large numbers, hunting may also represent a more significant threat, particularly with an increasing number of European hunters visiting the region. As well as direct mortality from gunshot, the resulting disturbance causes a functional loss of the habitat as a safe roosting site.

However, our knowledge about turtle doves outside their breeding grounds is limited, so research has recently started in this area.

on your farm or garden

your donation will help save turtle doves 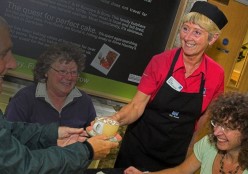 the way you shop can help turtle doves